1. Bring for use a typewriter that resonates with the general public.  You know what I mean - especially beautiful (glass keys are helpful), and anything else interesting such as folding carriage or rising keys.  This gets aesthetes on your side.

2. Ask your seatmate(s) if they mind if you type.  This was my biggest mistake the first time, but in my defense I was sick then.

3. Other than that it's just following the adage "It's easier to apologize than to get permission," and not arguing when directed to put it away.

4. My original plan, as mentioned, was to wait for screaming kids to drown me out and I still think that's a useful tactic.

You'll notice I only did half a page.  I'm just trying to put it out there and set precedent.  I think hauling it out early was not helpful the first time.  If someone doesn't like the sound (weirdos) they may object at the start of the flight but not toward the end.  Plus the FA's are busier toward the end.


Here is a typecast from the terminal at SeaTac in my new narrative practice style: 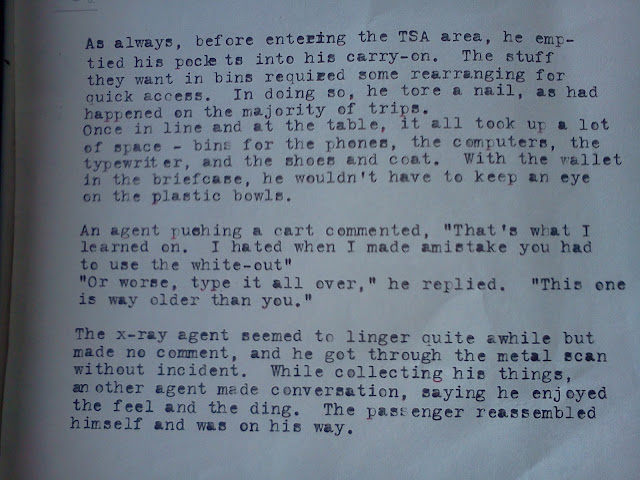