typewriters in the movies

One movie, anyway.  "Hopscotch" is one of my all-time favorite movies.  My old videotape of it deteriorated from overuse before my vcr quit working, and I haven't obtained a decent dvd player so I haven't bothered to get it on that already transient medium.  For these reasons I haven't seen it all the way through for a number of years.
Hulu to the rescue, by way of imdb.

It's a cold-war story of a CIA field agent relegated to a desk who decides instead to write his memoirs.  It's very humorous and fast-paced, as he outwits his pursuers without harming them  It's full of clever dialogue and has an enjoyable classical soundtrack. It took me a few years to find the Mozart Rondo in D featured in some of the chase scenes.
Obviously in 1980 a character writing a book meant typewriters:  He starts out on what looks like an Olivetti Studio 45 but I can't be certain.  It definitely appears to be an Olivetti product.

When he goes on the run, he switches to a Lettera 32. 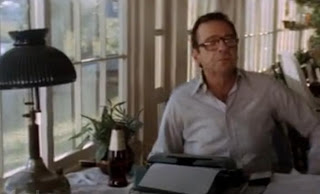